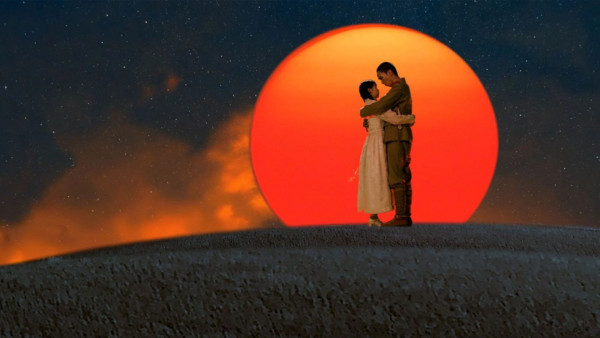 “Forget a swan song: Nobuhiko Obayashi’s final film is a shriek, a tirade, a lecture and a rollicking action-adventure stuffed into a three-hour pop-art package.”
—The New York Times

New York Premiere. The final film by Nobuhiko Obayashi finds the late director returning to the subject of Japan’s history of warfare following the completion of his “War Trilogy,” which ended with Hanagatami (JC 2018). On the last night of its existence, a small movie theater in Onomichi—the seaside town of Obayashi’s youth where he shot nearly a dozen films—screens an all-night marathon of Japanese war films. When lightning strikes the theater, three young men are transported into the world onscreen where they experience the violent battles of several wars leading up to the bombing of Hiroshima. A breathless cinematic journey through Japan’s past, Labyrinth of Cinema finds Obayashi using every trick in his book to create an awe-inspiring, visually resplendent anti-war epic that urges us to consider cinema as a means to change history. The culmination of an exceptional 60-year career worth celebrating.