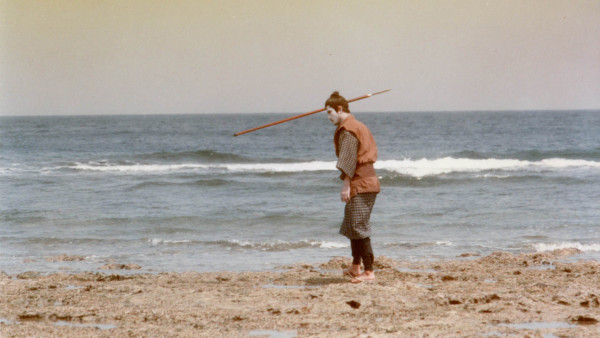 Imported 35mm Print. Go Takamine’s celebrated adaptation of the famous Uchinaa Shibai play follows Giru, a day laborer, who flees his post after seducing his employer’s daughter. Escaping his boss’s wrath, Giru hides in the mythical Untama forest where he is bestowed with mystical powers, transforming himself into the Okinawan folk hero Untamagiru. Featuring the acting talents of Jun Togawa and John Sayles, Takamine’s essential opus of Okinawan cinema follows the film’s titular character as he attempts to create an independent Okinawa on the eve of the reversion.

“Is Okinawa Japan?” I once said that Okinawa would be Japan if it lost its characteristic languor, or chirudai.

I would venture to say that what all of the films in this series have in common is that they present the confusion, verification, conflict, and struggle surrounding Okinawa being declared part of Japan as of May 15, 1972. They take a very cautious and careful approach to the question of whether or not Okinawa is Japan, a question that belongs to the realm of the “negative memory” of the reversion.

In my case, what I wanted to capture in my films is the repose of spirits, or mabui, of the deceased, who are perhaps still drifting through the daily landscape of Okinawa, the only part of Japan to experience ground warfare. However, it is the living who have “memory gaps,” and since the living are unreliable, those gaps cannot be completely reconciled. These memory gaps are endless. And so too are the “record gaps.” “Recording the air,” whether that is a documentary or narrative work, is a particularly important element in identifying a place. I think that is one of the most exciting aspects of cinema.

I would like to extend my gratitude to Japan Society, for planning and programming this series, as well as to all of the audience members.