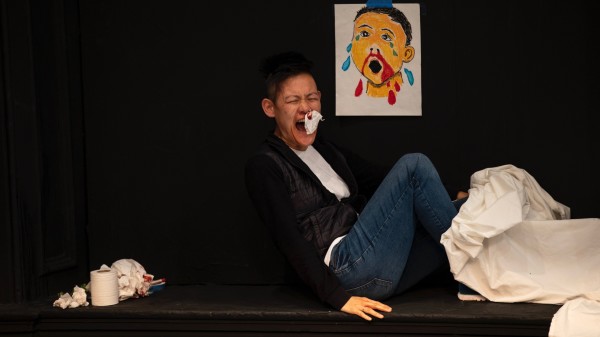 Co-presented with the Chocolate Factory Theater

Japanese American playwright/director Aya Ogawa presents this final version of their intimate autobiographical piece that explores their fractured relationship with their long-deceased, enigmatic father. Since the show's sold-out work-in-progress showings at Brooklyn Arts Exchange and The Public Theater's Under the Radar Incoming! Series, downtown theatergoers have been anticipating the premiere of The Nosebleed. Through a series of turbulent, absurd and poignantly comic vignettes, Ogawa reveals the seemingly insurmountable cultural and generational gap between themself and their father, who was a typical Japanese corporate businessman, and examines the questions faced by the playwright in their own motherhood experience today. A theatrical memorial and healing ritual for the audience, this darkly humorous, tender and inventive play considers how we inherit and bequeath failure, and what it takes to forgive.

All audience members will be required to show proof of vaccination at Will Call and wear a face mask at all times inside the Japan Society building. The approximate capacity per performance is 50 people.

The Nosebleed is co-presented with the Chocolate Factory Theater. The Nosebleed was developed in part through the Parent Artist Space Grant and AIR Program at Brooklyn Arts Exchange and The Public Theater’s Devised Theater Working Group/Under the Radar Incoming! Series. Subsidized studio space provided by The Play Company through the A.R.T./New York Creative Space Grant, supported by the Andrew W. Mellon Foundation. Support for The Nosebleed was provided by a residency at Mount Tremper Arts and The Made in NY Women’s Film, TV & Theatre Fund by the City of New York Mayor’s Office of Media and Entertainment in association with The New York Foundation for the Arts.

Major Support is generously provided by Doug and Teresa Peterson, with endowment support from the Lila Wallace-Reader's Digest Endowment Fund and the Endowment for the Performing Arts, established with a leadership gift from the Doris Duke Charitable Foundation.