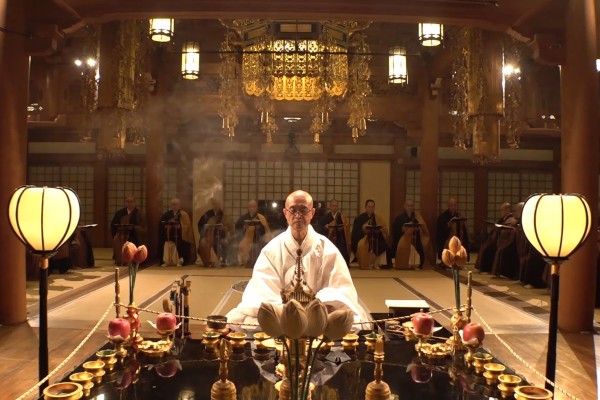 Co-presented with University of Chicago

Hailing from two of Japan's major Buddhist sects (Shingon and Tendai), the critically-acclaimed group Shomyo no Kai—Voices of a Thousand Years will showcase their mastery of a millennium-old chanting ritual with a performance that transcends sectarian boundaries. Discover one of the earliest forms of vocal music reimagined in a new work by the young female composer Yu Kuwabara, titled Mantra of Moonlight (Tsuki no Kogon). With a performance set in the exceptional acoustics and grand sacred space of An'yo-in Temple, one of the oldest temples in Itabashi Ward in Japan, this concert offers a rare opportunity to hear this ancient oral ritual come to vibrant life. Clad in brightly colored monastic robes, the choir alternates between monotone stillness and ecstatic polyphony. The ethereal voices of Shomyo no Kai swell in powerful harmony, enrapturing the listener into a transcendent meditative state.

The performance will begin with a lecture on the history of shomyo led by musicologist Steven G. Nelson, a professor at Tokyo National University of Fine Arts and Music, and conclude with a live Q&A featuring the head monks of both Buddhist sects, Rev. Kojun Arai and Rev. Koshin Ebihara. Held in conjunction with Japan Society Gallery's exhibition When Practice Becomes Form: Carpentry Tools from Japan, the concert will also highlight the temple's well-preserved architectural style of vintage kanawa tsugi technique, a traditional Japanese method of joining wood without nails or glue. A related online Workshop, Shomyo for Everyday Wellness will be held on Thursday, April 8, 8:30 PM EDT.

This program will be available to purchase and watch through April 30, following the premiere on March 30. This online event is part of Carnegie Hall's Voices of Hope festival.

Performed in Japanese with English subtitles.

Shomyo: Buddhist Ritual Chant is produced by NPO KAIBUNSHA, co-presented with The University of Chicago Presents, and supported by the Agency for Cultural Affairs, Government of Japan, Doug and Teresa Peterson, The JEC Fund and The Asahi Shimbun Foundation.

Endowment: Lila Wallace-Reader's Digest Endowment Fund and the Endowment for the Performing Arts, established with a leadership gift from the Doris Duke Charitable Foundation.