Waves Across Time: Traditional Dance and Music of Okinawa 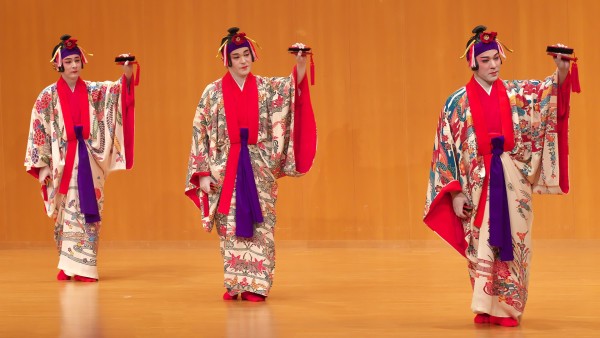 Commemorating the 50th anniversary of Okinawa’s return to Japan after the U.S.'s post-WWII occupation, a group of the islands' most exquisite dancers will perform a diverse repertoire of Okinawan traditional performing arts accompanied by live music. As specially selected by the young artistic director of the National Theatre Okinawa Michihiko Kakazu, the versatile artists will perform highlights from the traditional repertoire of kumiodori, a noh-inspired theater form developed during the period when the archipelago was an independent kingdom called Ryukyu (15th-19th centuries). The program also features popular folk dances (zo odori) with traditional ensemble music. From the brightly-dyed bingata costumes to the island music's iconic use of pentatonic scales, audiences are invited to relish the history and heritage of Japan's southernmost prefecture.

Performed in Okinawan and Japanese with English surtitles.

A pre-performance lecture begins one hour prior to the start of each performance, led by Dr. James Rhys Edwards. In 2015, he received his doctorate in Ethnomusicology from the University of California, Los Angeles, with a dissertation on the aesthetics and politics of performing arts in Okinawa.

For the health and safety of our staff and visitors, we kindly ask that you:

In commemoration of the 50-year anniversary of Okinawa’s reversion to Japan, Japan Society is engaging in a dynamic year-long exploration of the archipelago’s people, culture, history, and geopolitical significance. See more upcoming events from the Okinawa in Focus series →